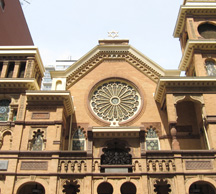 Park East Synagogue is an historic New York City landmark house of worship and one of the nation’s leading modern Orthodox congregations. It plays a vital role in the cultural, civic and spiritual life of New York City.

Founded in 1888, with its cornerstone laid in 1889, the Synagogue was based on the unique design of Schneider and Herter, famous German-born architects who engaged European artisans to build an architectural monument of rare beauty and distinction in the heart of Manhattan’s Upper East Side.

Park East’s architectural style is Byzantine, with dome-like cupolas set at various levels, each surmounted by a slender shaft supporting a Star of David. The facade of the building rises from an elaborately designed arched portico. Stained-glass windows are distinctive features of the synagogue. From within the sanctuary one appreciates two extraordinary circular stained-glass windows, one above the ark in pink, blue, and silver, called “the Moon” and the other, “the Sun”, in the rear wall, facing the street.

Park East Synagogue was originally called Congregation Zichron Ephraim when Jonas Weil, its first President, and his brother Samuel, named it in memory of their father, Ephraim Weil. Today, Park East is a vital congregation of families who are committed to practicing and living the traditional values of Judaism in their lives and in relation to the important issues of the city, nation and world. The synagogue’s influence, strength and dynamism in the community derive from the members of our congregation. 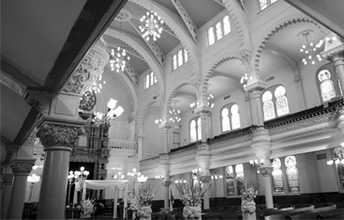 Today, Park East Synagogue is a vibrant spiritual and cultural center for Jewish life in New York City and beyond.

The synagogue is a welcoming house of worship; its doors are open daily from morning to evening for prayer, meditation and study. It is, in the words of its spiritual leader for over fifty years, Rabbi Arthur Schneier, a tent that embraces all, “How goodly are thy tents, O Jacob.”

Its congregants are actively involved in the civic life of New York and many of its community, educational, and aid programs are its expression of tikkun olam (repairing the world).

For more about Park East Synagogue go to - www.parkeastsynagogue.org

For more videos go to the videos page